Cassava (Manihot esculenta Crantz, family Euphorbiaceae), is a tropical root crop that tolerates uncertain rainfall, long dry periods, and poor soil. Cassava is a source of food, livestock feed, and income generation for some 800 million people, for whom it also holds strategic potential as a famine reserve crop. Cassava also has attracted interest as a bio-energy crop with potential as a cash crop for smallholders.

Africa produces over 50% of the world’s cassava, but the continent lags behind global peers in productivity. Cassava is popular with African farmers because it is amenable to mixed cropping, with processing and infrastructure technology firmly embedded in many local and regional food systems. Surplus production coupled with growing industrial demand has stimulated commercial exploitation of the root. In turn, improved varieties, mechanization, and agronomic practices have become focal points in boosting Africa’s cassava yield curve.

The Improved Agronomic Practices for Cassava Production assignment was initiated in Ghana, West Africa by ACDI/VOCA under USAID’s Farmer-To-Farmer Program (F2F) authorized by the U.S. Congress in the Farm Bill. Primary in-country host was Caltech Ventures Limited (CVL), a commercial producer of cassava starch, flour, and starting 2015, ethanol. CVL has 3,000 hectares of farmland in the Volta region near Ho, of which 350 hectares are under cultivation either by CVL directly, or by outgrowers who produce cassava for CVL under agreement in exchange for crop inputs and marketing support.

The objectives for this assignment were to: (1) assess the current practices of CVL’s farm and that of their outgrowers and provide recommendations for improvement; (2) based on the assessment, train staff on best practices to boost production; (3) train CVL on how to mechanize their operation; (4) develop a cassava production manual to guide CVL in their farming operations; and (5) make recommendations on any other professional support that will strengthen the CVL in its operations. 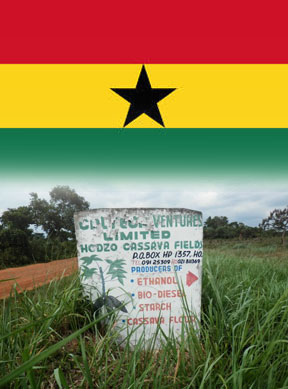 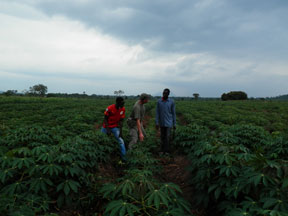 Assessing the uniformity of cassava growth with Caltech field staff. 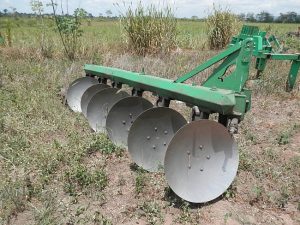 CVL disc plow, pictured here, consists of a series of discs angled to the direction of travel and sometimes to the vertical. Disc plows are preferred for primary tillage where ground conditions are rough as they tend to ride over obstructions. Disc plows do not completely bury residue in the same manner as the moldboard plow.