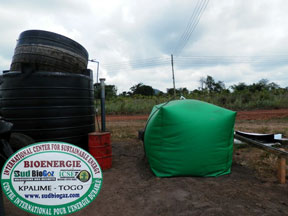 Model biogas plant in Ghana, West Africa. Burning wood is still the traditional energy source for heating and cooking purposes in low-income countries. Bioenergy has promised to improve rural livelihoods but impacts in North America have been uneven.

Let it not be said that we don’t live in interesting times, a point that could not have been foreseen even a year ago: oil sinking under US $30 a barrel; dislocated energy markets; silenced fracking rigs; and a global commodities glut showing no sign of recession any time in the near future. Harking back a decade, things were very different. In 2005, the US Congress passed The Energy Policy Act (EPA 2005), which laid the groundwork for domestic biofuels by mandating the blending of renewable fuel with gasoline, up to 7.5 billion US gallons by 2012. Two years later, renewable fuel targets were extended to 36 billion gallons by 2022 under the Energy Independence and Security Act of 2007 (EISA 2007). Ever since, foes have lobbied, unsuccessfully up to this point, to repeal the ethanol mandate. Meanwhile, the bioenergy sector has languished through the Great Recession despite oil peaking above $145 per barrel in 2008 and $100 multiple times from 2011-2013. On the other side, corn growers are rejoicing the ethanol mandate because it locks in demand for a product they have to sell. END_OF_DOCUMENT_TOKEN_TO_BE_REPLACED