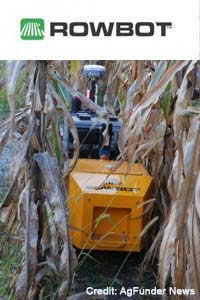 December is turning out flush on the robot news front, what with Google’s “moon shot” acquisition of Waltham, Mass.-based Boston Dynamics, maker of borg-ian robotic contraptions with names like BigDog, Cheetah, and Wildcat.  Concurrently, there’s the less alien but equally intriguing (at least to us aggies) debut in NPR’s The Salt blog, AgFunder News, and Minnesota Business Journal, of the Rowbot phenom: a self-propelled, terrestrial, 22-inch wide by 7-foot long robot designed for the singular purpose of applying in-season fertilizer nitrogen to corn. If the Boston Dynamics bots conjure up images of fleet-footed quadrupeds and armored insects, Rowbot is more like a slug trailing beneath a leafy canopy, slow but sure.

Rowbot was conceived by three multi-talented brothers: Charlie, Kent, and John Bares,  driven to curb the overuse of fertilizer nitrogen and low fertilizer efficiency in corn production. Coupled with fertilizer use are ever-increasing levels of soil compaction from the heavy machinery needed to apply fertilizer to farm fields, and in-season fertilizer application timeliness, which is often constrained by weather, crop canopy characteristics, and the availability of labor. The overuse of nitrogen fertilizer and poor synchronization between in-season nitrogen supply and plant demand cuts efficiency and productivity. Further, the unused nutrients may become pollutants.

Nitrogen is the primary determinant of plant productivity. As such, plants require nitrogen in larger amounts compared with other nutrients like phosphorus and potassium. Priced at US $112 billion, nitrogen fertilizer is the largest segment of the global fertilizer market, accounting for approximately 61% of total nutrient use (ReportLinker, 2012; Yara, 2012). Applying fertilizer nitrogen in excess is wasteful and can harm the environment. What if we could deliver, precisely, in the root zone of a corn plant, the amount of nitrogen needed at critical points in its life cycle such that productivity and efficiency are maximized while minimizing damage to soil and the environment? In the past, farmers have had few tools to hit this mark.  Are robots poised to change this?

What would be groundbreaking, if totally revolutionary, is finding an algorithm for the exact amount of nitrogen fertilizer needed by a corn plant taking account of the multitude of variables that affect nitrogen uptake by plants: weather, soil, cropping system, variety, growth stage, to name a few; and then developing an on-the-go robotic system for delivering that nitrogen. The term “on-the-go” means that soil and crop data are being collected while a vehicle or implement is traversing the field. NPR reports that Rowbot is “designed to apply nitrogen fertilizer with a lot more precision. Inside are real-time sensors that are studying the plants and making find-tuned adjustments to how much fertilizer is applied to each plant” according to Kent Cavender-Bares. In contrast, the Minnesota Business Magazine announced, conservatively, that “In the near future, the Rowbot team hopes to have a robot with enough cameras and sensors to make real-time decisions.” Given this ambiguity, it is impossible to sketch out, or even guess at, the details of Rowbot’s system for precision management of in-season fertilizer nitrogen.

Turns out, even without the fancy robotics precision management of nitrogen is no easy task because nitrogen is a tricky nutrient. In the atmosphere, nitrogen exists as an inert diatomic (=two N atoms) chemical species stabilized by a triple covalent bond. The covalent bond is one of the strongest chemical bonds in nature, involving the sharing of electron pairs between two atoms. For nitrogen to become plant available, atmospheric diatomic nitrogen must be torn apart and combined with oxygen and hydrogen atoms as nitrate (NO3–) and ammonia (NH3), two water-soluble forms of nitrogen. How does this happen?

There are three principal mechanisms: (1) biological fixation involving symbiotic (Rhizobium spp.) bacteria that colonize the roots of legume plants, and free-living, non-symbiotic (Azotobactor, blue-green algae, photosynthetic bacteria) micro-organisms, which are endowed with special enzymes that split atmospheric dinitrogen and combine it with hydrogen under normal atmospheric pressure and temperature; (2) energy released by lightning can split dinitrogen and combine it with hydrogen (NH3) and oxygen (NO3–); and,  industrial fixation through the Haber-Bosch process for ammonia (NH3) synthesis.  Much of the fertilizer nitrogen used in agriculture today comes from the Haber-Bosch process. It would not be conceivable for planet Earth sustaining 7.2 billion (2013) human beings let alone 9+ billion predicted for 2050, in anything resembling our present mode of living without the industrial ammonia process discovered by German chemists Fritz Haber (1868-1934) and Carl Bosch (1874-1940) just prior to WWI.

Once fixed in plant-available form, nitrogen is subject to seven routes that it can take to change its form or cause it to disappear completely from the soil: mineralization, immobilization, nitrification, denitrification, volatilization, leaching, and erosion. These processes are grouped into a global system called the “nitrogen cycle” (Figure 1). 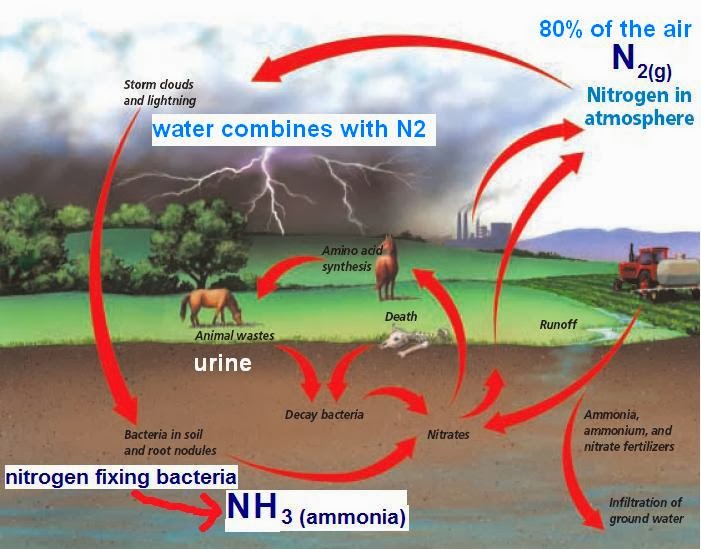 Figure 1. The global nitrogen cycle represents the flow of nitrogen in the environment.

Nitrogen is a fickle nutrient, and figuring out how much to apply is something of a guessing game. Unlike phosphorus, potassium, and some plant micro-nutrients, there is no universal test for plant-available soil nitrogen. When you submit a soil sample to an agricultural laboratory for nutrient testing, the results normally do not indicate how much nitrogen is in the soil. Fertilizer nitrogen recommendations are usually given as “blanket” rates based on crop-specific “realistic yield estimates” (RYEs) that take management, soil and environmental factors into account. The RYE method leaves plenty of wiggle room and therein lays its Achilles heel. Nutrient management is part science and art, and it’s the experience-based “art” that is difficult to translate to digital bytes of code. The average efficiency of nitrogen in crop production hovers around 50% (Delgado et al., 2001). In other words, on average, worldwide, for each pound of nitrogen supplied, only one-half is utilized by the plant. The other half is lost, mainly through leaching, volatilization, denitrification, and erosion (the nitrogen cycle). That doesn’t mean we can’t improve fertilizer efficiency, or mitigate the environmental impacts of intensive, high-production agriculture. We can take soil credits where nitrogen has been previously applied (either as inorganic fertilizer, manure, compost, or crop residue), and fuse this information with in-season soil testing for nitrate, as with the pre-sidedress nitrogen test (PSNT), for predicting if additional nitrogen should be applied to corn. Cornell University is also developing the weather-adjusted Adapt-N tool for precision nitrogen management. Collectively, these methods are still under development and interpretation of the results is highly dependent on local testing and experience.

So what’s the basis for precision nitrogen management employed by the creators of Rowbot?

We don’t know, but there are promising approaches to precision management that may be deployed robotically or with conventional pull-type agricultural machinery in the tech pipeline. Most likely these systems will combine aerial and terrestrial platforms for collecting high-density information about soil, terrain, and crop health and nutrition.  For example, unmanned aerial vehicles (UAVs) aka “drones” under development by Bosh Precision Agriculture and others, involve remote sensing of soil characteristics and growing conditions. Japan and Brazil have long deployed UAVs for precision spraying. Proximal sensors are needed to test, process, and make real-time decisions about nitrogen fertilization while being dragged near or in the soil. A number of such sensors have already been commercially deployed, such as the Mobile Sensor Platform (MSP) developed by Veris Technologies® of Salinas, KS. The MSP technology may be equipped with an array of radiometric, optical, and electrochemical sensors for characterizing field variation in soil electrical conductivity (EC), pH, and color. None of the sensors is capable of direct measurement of soil nitrogen; rather, they log information related to soil properties known to affect plant productivity.  For example, soil EC measures the soil’s ability to conduct an electric current and is correlated with soil properties like texture (the relative amount of sand, silt, and clay), cation exchange capacity (CEC, a measure of the nutrient-holding capacity of soil), salinity, drainage, and subsurface characteristics, e.g. compaction. The Veris OpticMapper uses dual-wavelength spectroscopy for on-the-go measurement of soil organic matter, which is correlated with water and nutrient holding capacity in soil. Similarly, the Veris pH Manager uses a direct soil measure (DSM) implementation ion-selective probe technology for on-the-go measurement of hydrogen ion (H+) activity in soil. Ion-selective probes (ISPs) and ion-selective field-effect transistors (ISFETs) are electrochemical sensors with special membranes that produce a voltage output in response to the activity of specific ions. Benchtop and portable pH meters are examples of commercial ISPs. Commercial ISP/ISFET probe technology for measuring stationary soil NO3– concentration has been available for some years but its use in on-the-go, spatially-informed precision nitrogen management is still experimental.

Will drones and bots someday take control of the herculean task of feeding the world? I think it will happen. Rowbot offers a glimpse of the future where all agricultural operations are delegated to unmanned aerial and terrestrial field vehicles. Farmers will keep the system running and make decisions, but it will require much less human intervention. Of course, this doesn’t bode well if you like operating the big rigs or revel in the contemplative act of picking peas.

But take sumping the hog slats…I’m there!

Sethuramasamyraja, B., V.I. Adamchuk, D.B. Marx, A. Dobermann, G.E. Meyer, and D.D. Jones. Analysis of an ion-selective electrode based methodology for integrated on-the-go mapping of soil pH, potassium, and nitrate contents. Transactions of the ASABE 50(6): 1927–1935.

Soil, Water and Food Production: A Tale of Two Seasons