Move over, wheat, rice, barley, oat, and maize: Your botanical imposters are poised for global conquest! Yes, the pseudocereals are on the up and up, particularly among North American and European culinary savants and health conscious types. And, in a nod aimed at focusing attention on underexploited genetic resources for developing countries, the Food and Agriculture Organization of the United Nations (FAO) has anointed 2013 the “international year of quinoa”, a pseudocereal. But what exactly are pseudocereals, and why all the ballyhoo over them?

The term “pseudocereal” refers to a class of cosmopolitan grain-like plants, including old standbys like buckwheat (Fagopyrum esculentum), and not-so-familiar plants like quinoa (Chenopodium quinoa), kañiwa (Chenopodium pallidacuale), amaranth (Amaranthus spp.), huazontle (Chenopodium nuttaliae), and chia (Salvia hispanica). True cereals are monocotyledon (one seed leaf) plants, all members of the grass family Poaceae, in botany lingo. Corn, wheat, oat, sorghum, are familiar monocot grass plants. Pseudocereals, in turn, are dicotlyledon (two seed leaves) broadleaf plants. The so-called “dicots” are a large, diverse group of flowering plants that include garden mainstays like cucumber and potato, and oilseeds soybean and canola, among many others.

Pseudocereals like quinoa, chia, and amaranth have surged in popularity because their seeds are nutritious, offering a favorable balance of amino acids, health-promoting fatty acids like omega-3, dietary fiber, minerals, or a combination of these.  Pseudocereals also earn bonus points for being gluten-free, a food preference on the increase. Quinoa production has jumped since 2008 in the core Andean producing countries of Bolivia, Ecuador, and Peru (Figure 1). Quinoa exports from the region have also risen, fueled by demand in Europe and North America where the grain has acquired haute cuisine status as a super “food” possessing life-extending, health-promising virtues. Comparisons to meat have been made. As such, there’s concern that the boom in quinoa’s popularity is exhausting domestic supply in the exporting countries. 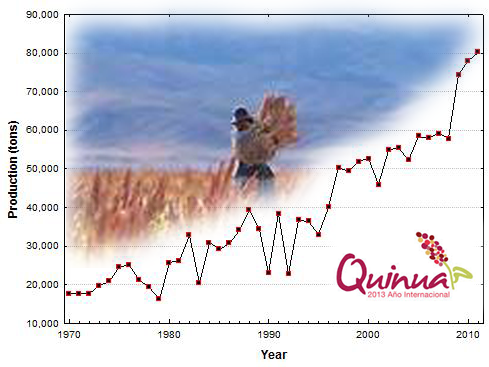 Naturally, curious (and skeptical) minds want to know: Do these upstart grains deserve the commercial hype? Are they really super “foods”, or is it just pantry “hokum”?

To answer this question, the Agrosphere Journal’s dedicated Acme Scientific Research Collaborative® staff has canvassed the global literature to produce a survey of the pseudocereals: history, botany, and nutritional value in the human diet. Our first installment examines quinoa and allies, available here. Aspects of grain protein quality are emphasized since this seems to be the focal point of quinoa’s nutritional aura. Warning: this 13-page report is an advanced treatment of nutrition and food chemistry with citations from professional journals that may not be accessible to all readers of this blog. The report delves into amino acids, amino acid profiles, scoring patterns, PDCAAS, fatty acids, fiber, vitamins, and minerals. As a long-form piece, it’s not well suited for the blogger platform. Therefore,  it has been placed on another server where it can be accessed via the above link rather than reproduced here. If you’re looking for a science-informed assessment of the mob of nutritional claims about the pseudocereals, this piece is an excellent starting point.

The pseudocereals may seem far removed from my current preoccupation with irrigation and drainage but in fact, the subject is near and dear to my heart. Back in the digital dark ages of the 1980s in what seems like another lifetime, I tested amaranth grain and leaf protein content response to soil nitrogen application. Later on, I field tested the first generation of “Roundup Ready” soybean transgenics. The fate of transgenics in the last decade has become intimately bound with that of the amaranths, particularly the Palmer amaranth (Amaranthus palmeri), due to the species’ acquired resistance to the herbicide glyphosate. Which is just another way of saying that nature is one big sloppy enchilada. Napkins de rigueur and please mind the crumbs, they’re the nuggets that so often matter.

Are pseudocereals like quinoa a regular part of your diet? What is their perceived value above and beyond other cereal and oilseed grains? We’d like to know!!