Soil, Water and Food Production: A Tale of Two Seasons

Food production depends on the two essential ingredients: soil and water. Mineral soil provides the medium for mechanical support and nutrients for plants. Water is the required unit of exchange for the acquisition of essential nutrients and CO2 by plants. There is no question that the supply of plant-available water has always been a major impediment to realizing greater food production, worldwide.

To drive this point home, consider the following chart: 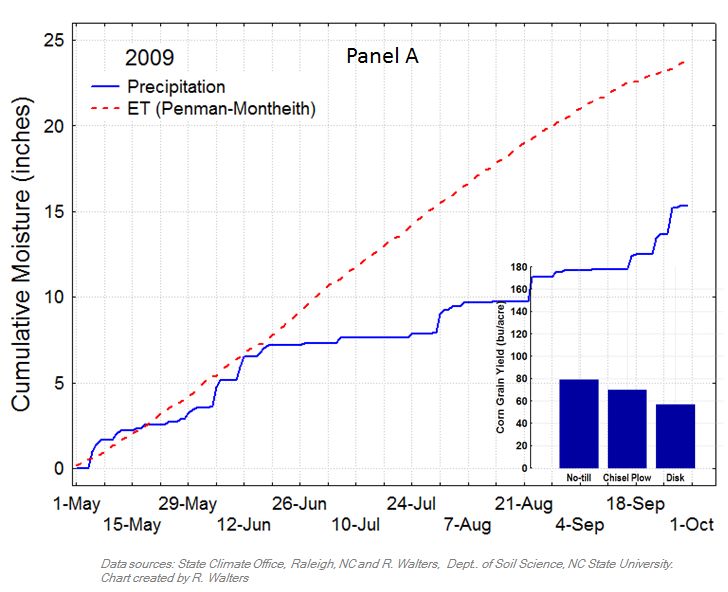 Panel A depicts cumulative precipitation and reference crop evapotranspiration1 (ET) from May to October, recorded at the Upper Piedmont Research Station, Reidsville, North Carolina in 2009. The bar graph in the lower right corner shows corn grain yield measured from selected tillage plots at the UPRS, which have been maintained in a corn-soybean rotation by scientists in the Department of Soil Science at NC State University for 30 years. Note that ET (red dash line) and precipitation (solid blue line) are roughly balanced early in the season, but that precipitation for the critical June-July corn growing period falls considerably below ET. This is normal for the North Carolina Piedmont and Coastal Plain.  In 2009 we measured 79 bushels per acre corn grain under no-tillage, and 70 and 57 bushels per acre under chisel and disk plow tillage planting systems, respectively, averaged over four replications (15.5% moisture basis). Average corn grain yield between 1987-2013 under no-tillage was 97 bushels per acre, and 83 and 74 bushels per acre for chisel plow and disk tillage, respectively. So, 2009 was drier than average if we take grain yield as a proxy for the relative imbalance of precipitation and crop ET during the growing season.

Now look at Panel B: 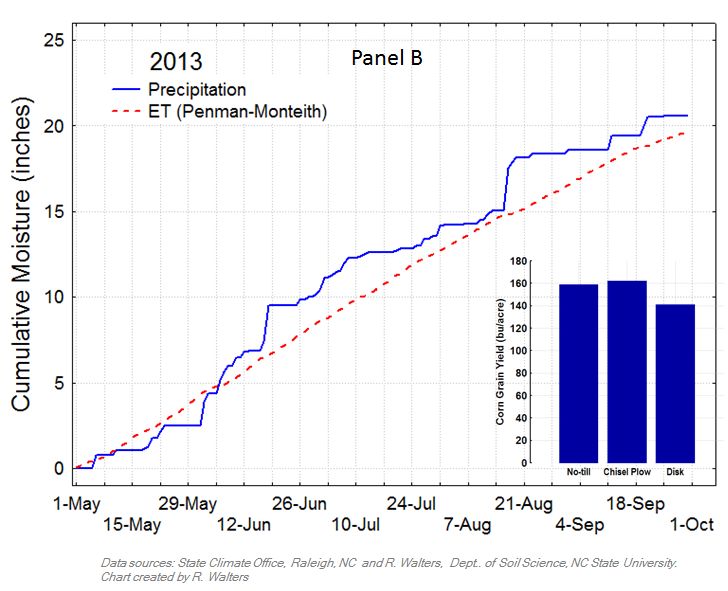 Panel B depicts cumulative precipitation and ET from May-October in 2013. As in 2009, ET and precipitation are roughly balanced early in the season. However, the data show that precipitation was greater than ET for the remainder of the 2013 growing season.  It stands to reason that corn growth was not limited by available soil moisture at any time during this period. What effect did this have on corn grain yield? The bar graph in the lower right corner tells the story: average grain yield under no-tillage was 159 bushels per acre, a two-fold increase over 2009. Corn grain yield under chisel and disk plow tillage was 162 and 141 bushels per acre, 2.3 and 2.5-fold greater, respectively, over 2009. In fact, our combine registered greater than 200 bushels per acre in some plots, a level of production we have never observed. What can we conclude from these differences?

First, it takes a lot of water to grow corn! The major pathway for water entering the corn plant is through the root system. Any stress hindering root growth necessarily hinders yield. Soil is the environment in which plant roots grow, and from which plants must obtain 14 of the 17 essential nutrients including the water required for carbon assimilation. Soil water and plant root access to soil water is critical.

Second, yield differences are greater between seasons than between tillage treatments. In a dry year conservation tillage systems (no-till, rip, chisel plow) outperform conventional plow tillage (disk, moldboard plow) hands down. If it’s too dry everything goes south. On the other hand, yield differences are less pronounced in a wet year as shown in Panel B. Now, I can hear midwestern cornhuskers laughing at our pitiful southern yields. Let me explain. About two-thirds of the mapped Piedmont soils in North Carolina are eroded “Typic Kanhapludults”, a taxonomic nom de sol for old, weathered mineral soils with strongly developed horizons (horizons are layers, as in a cake). They go by names like Cecil, Pacolet, Rion, Vance, and Madison. The Typic Kanhapludults have sandy to sandy clay loam surface horizons (the “A” horizon or “Ap” if under cultivation to about 8 inches deep) over loamy- to clayey-textured subsoil (the “B” horizon). Unlike Midwest prairie soil developed beneath sod (“Mollisols” or if you prefer, the “Chernozems” of Russian fame), the Typic Kanhapludults are not endowed with great nutrient and water holding capacity. Micronutrients are often low so to prevent deficiencies we lime our soil to a pH of about 6.0, which is considered slightly acidic. Root growth is often constrained by strongly acid pH (<5.0) in the subsoil. So those cut-aways of corn roots extending down 12 feet deep in prairie soils don’t exist here. In spite of these handicaps, corn yields pegging 300+ bushels per acre have been realized by southern producers but most of this acreage is under irrigation (and very good management). Yield potential for rain-fed corn depends largely on the weather and crop genetics. We can’t control the weather, but genetics is something we can tinker with.

Third, corn has a highly efficient mechanism for carbon assimilation (the “C4” metabolism). Harnessing the productivity of corn (and other cereal and oilseed grains) requires improving the efficiency of water use. Our data show incontrovertibly that grain yields would be greater in North Carolina and in corn-producing regions worldwide if more water was available during critical crop growth periods. The call to breed drought-tolerant crop varieties to ensure better water use efficiency and anticipate the uncertainties of climate change, has never been more pressing. We therefore strongly urge research aimed at examining the pathways for increasing the efficiency of crop water use with the understanding that the soil is vital to capturing the basic features of crop response. While we don’t anticipate that genetics alone will boost yields two-fold plus observed in our tillage plots (other factors like solar radiation, temperature, pest control, mineral nutrition, etc. contribute share), a +10% to +15% water use efficiency over current technology would be profitable.

1The reference crop is sod. Actual corn ET may be 20% higher particularly during critical stages like tasseling and grain filling.