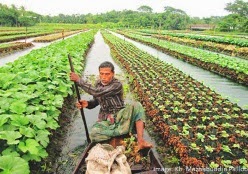 What are the forces that will shape food and agriculture in 2050? Will farming be human- or robot-centered? Organic or conventional? Artisan or industrial? Will it be châteaubriand, filet mignon or, an extra helping of Soylent Green for all? Is it even conceivable that a human population of 9+ billion can sustain itself, or is global ecological collapse inevitable? Aye, Robot aside, nothing is shot with more uncertainty and grand illusion than conjuring the future. Wendell Berry, the essayist, and latter-day agrarian prophet wrote that the fetish of “crystal-balling” arises out of too few jobs for people to do in the present. Maybe so. But there’s no denying that future gazing is serious business aimed at riveting public attention (and research $$). As ever, there’s no shortage of future seekers competing in the public arena nowadays and the competition is fierce. TED is omnipresent! Unfortunately, the future has a habit of veering off course, heedless to the beck of human-induced analysis, out-gassing, or apoplexy.

The 1970s were particularly fertile for soothsayers and gloom-and-doom purveyors. In an essay titled “Tomorrow is Our Permanent Address”, biologist John Todd, co-founder of the now-defunct New Alchemy Institute (NAI) on Cape Cod, argued that the structures of modern life, based on energy oil and gas, were irretrievably flawed. Efforts aimed at increasing efficiency via better design and engineering were simply calibrating the system’s coefficients and parameters. Its destiny was, ultimately, sealed by the laws of entropy underlying a biologically inert structure; as Todd and his co-Alchemists saw it, modern industrial life in all facets, including that of agriculture, was headed for global ecological collapse. We had better exit the techno-carboniferous merry-go-round or Nature would stage a revolution transmuting humanity to a heap of compost underfoot (or perhaps Soylent Green).

From this rather bleak view emerged concepts like aquaponics, the integration of hydroponics and aquaculture, and bioshelters, two areas pioneered by New Alchemy in its heyday. Aquaponics has survived to the present, but its structure template is embedded in the fabric of modern petro-technology, plastics in particular. Bioshelters, famously portrayed by NAI’s Prince Edward Island Ark, never took off. The idea of humans co-mingling in a biosphere with fish tanks, algae, and lettuce plants was not many people’s idea of a dream home. Geodesic domes also flourished for a while before turning passé for the same reason.

In a similar prognostic vein, a joint report issued in 2009 by the French National Institute for Agricultural Research (INRA), and the Centre for International Cooperation in Agronomic Research for Development (CIRAD), both headquartered in Paris, attempts to sketch out contemporary scenarios and challenges for the future of food. The report, titled Agrimonde, employs a combination of research and foresight studies, based on 30+ million statistics mostly from the United Nations Food and Agriculture Organization (UN FAO) since the 1960s to date. According to its creators, Agrimonde predicts a rosy outlook for global farming: The world should be able to feed its burgeoning population in considering two scenarios. The first scenario, called “Agrimonde I,” stresses ecological preservation as a condition of feeding the world. The second scenario, dubbed “Agrimonde GO” (Global Orchestration) gives priority to trade and economic growth over environmental protection. The Agrimonde I scenario, based on a food intake, daily, of at least 3,000 kilocalories (kcal) in all regions of the world, including 500 kcal of animal origin, would require an increase of just 30% in plant calorie output along with substantial cuts in food consumption in some countries and a big increase in others; whereas, the Agrimonde GO scenario would require 84% more in plant calorie output, assuming that present non-convergent (i.e. unequal) regional dietary trends will continue in the future. The figure of 3,000 kcal is the current world average for food intake, daily, with averages of 4,000+ kcal per day in the industrialized countries within the Organization for Economic Cooperation and Development (OECD) aggregate (Agrimonde divides the world into six aggregate regions based on production, trade, and bio-resources), to less than 2,500 kcal per day in sub-Saharan Africa. Unfortunately, the report does not say how such a global re-balance of food intake might be achieved, but Agrimonde I assumes that we don’t all have to become vegetarians, which is a relief.

One unexpected, if not totally startling, finding of Agrimonde is that African agriculture output doubled between 1961 and 2000, growing annually by 1.63%. That being said, African productivity remains the lowest, averaging 10,000 kilocalories per hectare (kcal ha–1) compared with 20,000 kcal ha–1 globally and 25,000 kcal ha–1 in Asia. In fact, Agrimonde shows that the annual growth rate of crop yields for the Asian aggregate roughly corresponds to its population growth. In contrast, agricultural output in the Former Soviet Union (FSU) republics increased annually by 0.34% over the same period. Not coincidentally, the population in the FSU has remained nearly flat. What are we to conclude?

Neo-Malthusians like John Todd always assumed that population growth must inevitably lead to systemic crashes, as exemplified by lemmings, prairie dogs, or Streptococcus bacilli in culture, outstripping resources with advancing fecundity. This has not happened yet. That humans do not behave like bacteria, or even prairie dogs, is obvious; but therein lays the fatal logical flaw. In fact, Agrimonde suggests that, in some cases, human population growth may actually stimulate innovation and consequently, food production (among other non-food technology products). Perhaps there’s some profound, deeper meaning to the old adage “necessity is the mother of invention”. In the event, I’m going with the premise that human population growth is not necessarily bad for the planet; it’s how we live, collectively, that matters. Of course, poverty is still a serious problem in the world, but this is because of war and other natural disasters, trade and politics sensitive costs associated with food distribution, food wastage and food chain inefficiency, speculation, and lack of purchasing power, not because we can’t produce enough to feed the world. Still, food production must increase and a question looms: What will it take to feed the world in 2050 and beyond?

I’m inclined to see food production in the future as a mosaic rather than a single, dominant infrastructure. Clearly, industrial agriculture isn’t going to be replaced by artisan modes of production unless we aim to resurrect yesteryear’s agrarian society, which isn’t realistic. At the same time, the farm-to-urban table movement occupies a vital niche even though it too, depends on modern infrastructure including fossil fuels; maybe less than conventional agriculture but tractors in any guise burn diesel fuel and crop culture, harvest, cooling, packaging, and transportation consume no small amount of energy. The definition of  “sustainable” agriculture is unspecific but time and cash flow are certainly two necessary conditions. 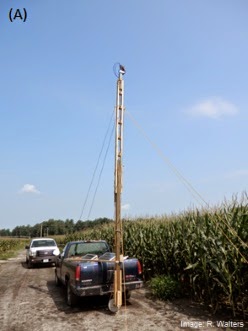 Imaging a corn field in North Carolina. Research underway aims to miniaturize hyperspectral cameras like the one pictured here so they can be mounted on UAVs capable of flying over/beneath the crop canopy capturing high-density information.

Throughout the history of farming, increasing food production has gone hand-in-hand with genetic progress. Genetics will continue to play a dominant role in the future. Today, we stand at the threshold, perhaps, of the greatest opportunity for accelerating genetic progress ever: transgenic and related genome editing technologies, alone or coupled with classical breeding methods. Cambridge molecular biologists Julian Hibberd and others are attempting to improve photosynthetic efficiency in rice by studying the mechanisms of inheritance that have evolved the “C4” metabolism in some warm-weather grasses such as corn, sorghum, and millet. The C4 plants are endowed with enzymes that are especially efficient at capturing atmospheric CO2, first fixed in a four-carbon organic acid molecule that is used further down in the photosynthetic chain for biosynthesis of carbohydrates and proteins. In contrast, the dominant pathway for CO2 fixation in terrestrial plants is via three-carbon molecules. Engineering plants with turbocharged C4 metabolism could increase yield by up to 50%. Engineering plants to avoid and/or tolerate environmental stress also beckons brightly. One challenge facing genetic improvement (transgenic or classical) is finding efficient ways to screen genotypes for promising crop yield traits, a process called “phenotyping”. Scientists’ ability to engineer novel genotypes in the laboratory far exceeds the capacity for phenotyping in diverse, open environments. Lack of efficient phenotyping technologies has hampered progress in bringing to market the resilient, high-performance crop traits that will be needed to feed the world in 2050. A project underway in North Carolina aims to develop terrestrial and airborne imaging technologies for a seamless, integrated high-throughput phenomics pipeline from lab to field (Figure A). We’re using a variety of remote sensors including LiDAR (Light Detection and Ranging), and imaging spectroscopy (“hyperspectral imaging”). Briefly, imaging spectroscopy senses electromagnetic radiation from the visible to near-infrared in multiple (224), discrete wavebands, where each pixel in a hyperspectral image contains this entire spectrum. Temporal spectral data can be used to calculate a wide array of vegetation indices that correlate with plant nitrogen fertilization, photosynthetic intensity and/or light-use efficiency, e.g. photochemical reflectance index (PRI), red-edge inflection point (REIP), and Fraunhofer line depth (FLD). 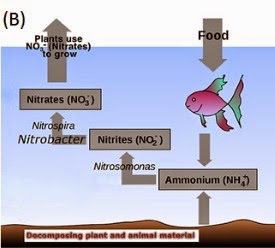 The nitrogen cycle in aquaponics. The same nitrification process operates freely in soil but in aquaponics the ammonium concentration in water must be tightly controlled. Graphic courtesy of I. Karonent adapted for aquaponics by S. Friend.

Flying beneath the radar of Agrimonde, and a world apart from digital phenotyping, innovative, scale-neutral, technologies like aquaponics are putting high-quality, fish and vegetables on the table of millions, rounding out the food production mosaic that I believe will contribute to sustaining the world’s population. Aquaponics is based on a sophisticated understanding of the nitrogen cycle (Figure B). Fish produce metabolic wastes like ammonia through normal respiration and excretion processes that are toxic to the fish at very low concentrations (several parts per million). This effluent must constantly be removed from the water. In commercial, high-density, fish farms, this is done by filtration and frequent changes of water. In aquaponics, ammonium-enriched water is circulated through a grow-bed that provides an aerobic substrate for nitrifying bacteria as well as a rooting zone for plants. The nitrification process is driven, principally, by two soil-dwelling bacteria: Nitrosomonas and Nitrobacter. Nitrosomonas oxidizes ammonium into nitrite (NO2–) as a metabolic process, while Nitrobacter oxidizes nitrite to nitrate (NO3–). Nitrate in the effluent is absorbed by plants, along with other soluble nutrients. Aerated, low ammonium water is returned to the fish tank where the cycle repeats itself. The system is powered by recirculating pumps, delivering a constant supply of nitrate and other soluble nutrients to plants while keeping ammonium concentration in the fish water very low. Nitrification is an acid-producing process, so water pH must be checked frequently and base added to buffer the system so that nitrifying bacteria are kept happy. Aquaponics is a multi-million dollar business, a far cry from the New Alchemy landfill picking days, but the principles and equipment are easily transferable to smallholder farms.

So it appears the future of global agriculture is indeed bright provided that we identify research priorities, mobilize resources, and make timely, strategic investments. But I don’t want to sound like I’m gushing with optimism, either. Human ingenuity is practically limitless, but there are many things that can go wrong. As so often, our predictions fail to anticipate surprise events, new discoveries, and the pathways of technological innovation. While the New Alchemists prepared for the inevitable crumble of gangrene, exhaustive ancien technology structures, a parallel structure based on silicon wafers was being born, and the world moved on.

Life Hack #1: Beware of human predictions. Tomorrow is a moving pixel with no fixed address. It cannot be resolved precisely no matter how closely we aim for it.