A novel residue management tool, the mechanical roller-crimper, was developed by farmers in the southern Brazilian sub-tropical states of Rio Grande do Sol and Paraná to manage high-density cover crop residues following the guiding principles of “zero tillage”. The roller-crimper uses the mass of a cylindrical drum with iron blades mounted in different configurations around its circumference to flatten and crimp standing residue, leaving a pressed, soil protective and weed suppressive blanket of mulch into which the principal crop may be planted. The objectives of this two-year project were to: (1) evaluate the effect of surface pressed, intact residue and residue orientation on weed suppression under different weed control programs; (2) examine the relationship between residue decomposition and incident weed pressure, and (3) evaluate the effect of residue management on cotton and soybean stand establishment and yield. The project was conducted at the Center for Environmental Farming Systems in Goldsboro, N.C. from 2004-2006. Project leaders: Robert D. Walters, Michael G. Wagger (Department of Crop and Soil Sciences), Keith R. Baldwin (NC A&T University).

What did we learn about the mechanical roller-crimper? See the following reports for details:

Further reading: Soil Management and Conservation for Small Farms. FAO Soils Bulletin 77. -V.H. de Freitas. This bulletin describes innovative strategies for smallholder technologies and equipment aimed at countering land degradation in the State of Santa Catarina, Brazil. It also includes a description of early prototypes of the mechanical roller-crimper that would inspire later designs of the tool in North America. 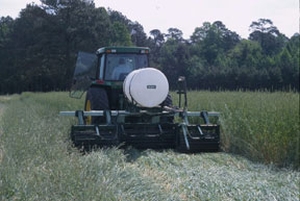 Field demonstration of the KMC roller-crimper in North Carolina in 2003.

Short video demonstrating the roller-crimper laying down a summer annual cover crop of purple millet. Later, we planted fall cabbage directly in the millet residue with a special no tillage transplanter and it turned out beautifully. There are still a few roller-crimpers around North Carolina today but the tool has not seen wide adoption in the commercial sector.